Regional approach to Protected Areas and Conservation in Eeyou Istchee

Regional Approach to Protected Areas and Conservation in Eeyou Istchee

The Cree Regional Conservation Strategy (hereafter the Strategy) is a Cree Nation initiative, developed by the Eeyou Protected Areas Committee. This Committee is comprised of representatives from all 10 Cree communities, along with members from the Cree Trappers Association (CTA), Cree Nation Youth Council (CNYC) and the Cree Nation Government (Environment and Remedial Works Department and the Culture and Language Department.). The Strategy provides a framework for the development of conservation and protected areas initiatives in the Cree territory (Eeyou Istchee). This document outlines our vision, goals, planning approach, proposed conservation designations and a schedule for implementation of the Strategy. It will become the policy document guiding Cree work in the area of conservation and the establishment of protected areas.

This Strategy is designed to ensure respect for Cree rights and protect Cree lands, waters and resources for today and tomorrow. Generally these are the rights of the Cree under the Constitution of Canada, Cree values and customs such as those codified in the Eeyou Hunting Law and the protection of Cree language and culture. More specifically, this includes Cree rights that stem from a number of Agreements and treaties including the James Bay and Northern Québec Agreement (1975), Cree-Quebec New Relationship Agreement, more widely known as the Paix des Braves (2002), the Cree-Canada New Relationship Agreement (2008),Eeyou Marine Region Land Claims Agreement (2010) and the Governance Agreement (2013). Furthermore, it is consistent with the rights related to conservation that are enshrined in the United Nations Declaration on the Rights of Indigenous Peoples, as well as Article 8j (and others) in the United Nations Convention on Biodiversity.

This Strategy is built using Cree traditional knowledge and western scientific knowledge to ensure that the best of both of these knowledge systems inform our planning and decision-making. The Strategy is also designed to provide a guiding framework for the establishment and maintenance of effective partnerships between the Cree and other Governments (both public and Aboriginal), as well as with non-Cree residents of Eeyou Istchee, non-governmental organizations (NGOs), researchers and other interested stakeholders to achieve the vision and goals set out in this Strategy.

“Our Vision is to maintain strong ties to the Cree cultural heritage and way of life, and sustain biodiversity by creating a large, interconnected network of conservation areas in Eeyou Istchee.” 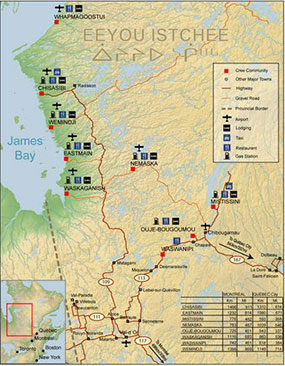 “Eeyou Istchee” is the traditional territory and homeland of the Cree of northern Quebec. The term means “the land of the Eeyou/Eenou” (the “people”). The Cree, have used and occupied all of Eeyou Istchee for thousands of years, from time immemorial, and continue to do so today.

Eeyou Istchee covers some 400,000 square kilometers (see map Appendix A) with over 300 traplines that continue to be occupied and used for traditional practices. It includes the lakes and rivers that drain into eastern James Bay and south-eastern Hudson Bay, as well as significant portions of both those marine areas. This enormous territory embraces a wide range of environments, from the marshes, estuaries and islands and waters of the coastal zone to the upland areas far inland, and from the dense, coniferous forests in the southern areas to the sparsely-treed tundra further north. For the Cree, all of it - the lands and waters, the plants and animals – is sacred.

There are more than 18,000 Crees, with almost 16,000 residing in ten Cree communities. The five communities located along the east coast of James Bay are Waskaganish, Eastmain, Wemindji, Chisasibi and Whapmagoostui. The five inland communities are Waswanipi, Washaw-Sibi, Nemaska, Oujé-Bougoumou and Mistissini. The southern part of the Eeyou Istchee territory is shared with non-Cree residents, who reside in the towns such as Chibougamau, Chapais, and Matagami.

The James Bay and Northern Quebec Agreement solidified the rights of the Crees and set up regimes for the protection of these rights such as the Environmental and Social Regime of Section 22 and the Hunting, Fishing and Trapping Regime of Section 24.

More specifically concerning conservation, JBNQA describes the principle of conservation in section 24.1.5 as “the pursuit of the optimum natural productivity of all living resources and the protection of the ecological systems of the Territory so as to protect endangered species and to ensure primarily the continuance of the traditional pursuits of the Native people, and secondarily the satisfaction of the needs of non-Native people for sport hunting and fishing.”

These two regimes in the JBNQA are essential in addressing the conservation of biodiversity along with the 2002 adapted Forestry Regime found within the Paix des Braves Agreement.

The categorization of Cree land plays an instrumental role in the level of conservation performed by the responsible governments:

The James Bay and Northern Quebec Agreement covers the Hudson Bay drainage basin in Québec. Eeyou Istchee is predominantly found within this drainage basin; however some Mistissini and Ouje-Bougoumou traplines are located within the St-Laurent drainage basin. Eeyou Istchee is located within three administrative regions: Nord du Québec (James Bay and Kativik Regions), Abitibi-Témiscamingue and Saguenay-Lac Saint-Jean. The area is dominated by the Central Shield Forest Ecoregion, with the Southern Hudson Bay Taiga Ecoregion to the northwest and the East Forest/Boreal Transition Ecoregion to the south.

Eeyou Istchee is not limited to terrestrial boundaries; the coastal communities are connected to the shores and water of James and Hudson Bays. The Eeyou Marine Region Lands Claims Agreement recognizes the rights of the Crees in the offshore region of Eeyou Istchee. Under federal jurisdiction, this agreement provides for the creation of marine protected areas within the offshore area. This conservation strategy is therefore designed to assist in the development of protected areas in both the terrestrial and marine regions of Eeyou Istchee.